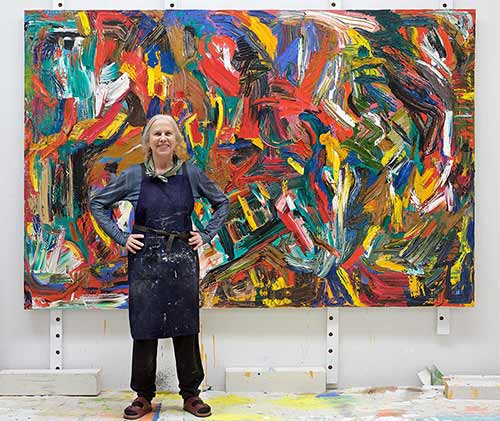 Kay Harvey grew up in New Mexico, moving there at the age of 4. Painting was always something she loved to do as a child. She studied painting in college at Bradford Jr College with Doug Huebler who told her “if you really want to study art go to a University”. She took that advice and went to The University of Arizona where she got a BFA. She then traveled to Houston and worked at The Houston Museum Fine Arts School for a few years before going to Illinois Institute of Technology, The Institute of Design where she studied in the graduate department printing with Misch Kohn and photography with Joe Jachna. After graduate school she moved back to New Mexico and began painting in earnest along with having a family. She has always loved to travel and it has been an inspiration in her work. The process of painting has been her motivation and her willingness to learn and grow from her art has been her desire. She worked with some master artists in printing, painting and sculpture in the 90’s in Santa Fe at The Santa Fe Art Institute. Kay worked in New York in 1996 at The International Studio Program and was in a group show there. She has had some shows around the country, Chicago, San Francisco,Tulsa and in Santa Fe, which have been encouraging and inlightening experiences. Mainly she has done her art.

"Kay Harvey’s unique vision has emerged through much cross reference to the figure as it is drawn, collaged or molded in clay, and now the figure emerges through the gesturing of paint, slithering across the surface it becomes a figure-landscape. Kinetically broken up and fragmented, the figure-landscape is sometimes a handwriting, sometimes a map or contour. Though the definition is unclear, the gesturing is very unified and is a much realized, ritual motion of what a painting or print can be said to be about: color, texture, light and surface."
- Lynda Benglis